On day that rained in fits and starts, when everything seemed to shake awake with the aliveness of spring, I took a short bike ride to one of Milwaukee’s smallest officially recognized green spaces – Highland Park.

I started in my neighborhood, Washington Heights; the sidewalks (as usual) were full with children and dogs and (as usual) both were loud and appeared terrifically hard to wrangle. The air was heavy and saturated with lilac and pine and something that smelled like hay.

Kitty corner from each other, St. Sebastian’s  and Mt. Olive both advertised the National Day of Prayer and invited worshipers inside. I noted that Mt. Olive had a larger wooden sign and longer operating hours and wondered if the churches were locked in some kind of papal vs. Protestant version of a Hatfield & McCoy feud.

I passed the bridge over Hwy 41 and saw Miller Park, its retractable roof like the bony curved spine of an enormous as-yet undiscovered dinosaur. 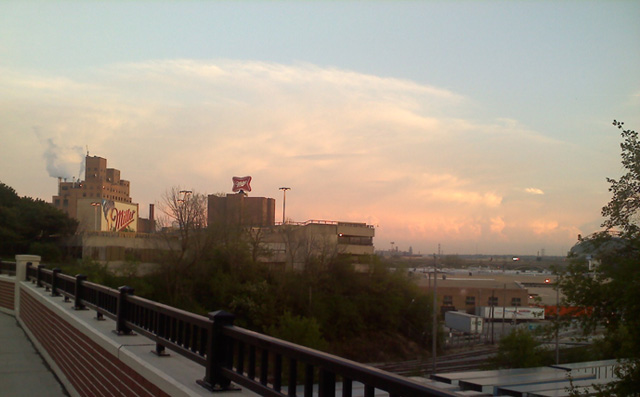 Bridge on Highland Blvd with a view of Miller brewery

I rode down the boulevard that curves through Washington Park like scoliosis. I used to go through there every day on my way home from work. Cars were always having bang ups at the curves, perhaps lost in the joy of going wheeeeeeee down a hill.  Once, for days, I biked past a spot littered with the shrapnel of headlights and plastic and blood.

I arrived at Highland Park. It’s a long, narrow area wedged directly in between two of the most iconic Milwaukee businesses: the bikes and the beer.  It’s barely a park; it’s a space, a segment. A hyphen between “Harley” and “Miller”.

It’s quiet, but for a low general hum of industrial activity which surrounds the place. A small playground, some robust oak trees, and hundreds of bald or wispy white-headed dandelions stoically awaiting the mower. A few nooks seemed perfect to lay down and stare up at the tops of the brewery buildings, breathing in the air that so often smells of hops and barley.

The sun began to set and I didn’t find anything else to see, so I took my bike and turned back home.