You are here: Home › Birds › The American Robin

The robins that hatched in the nest outside our front door a few weeks ago are monstrous. I peer at them through pane glass with the curtain pulled back – a nest overstuffed with mottled feathers and jostling beaks pointed upward in constant expectation. Mother and father swoop by in near continuous loops now, like aerial firefighters dropping buckets of water on something unquenchable.

This morning, I walked up the front steps as at the male was careening in for a drop off. Surprised by my presence, he recharted his course, puttered to a favorite branch and squeaked at me at me, worm in mouth, in what I imagine was an irritated tone*. I pressed myself against the far edge of the porch and stood still. In a moment, he returned for delivery, perching next to the nest. Four beaks lunged upward, wide open pink mouths, chattering wildly.* 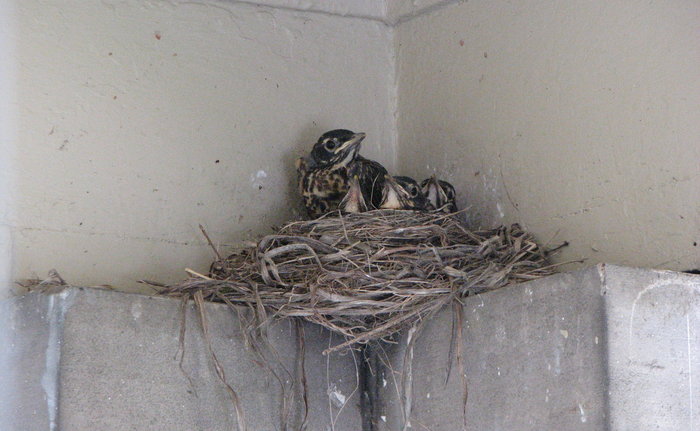 Four New Robins Bursting Out of Their Nest

“Industrious and authoritarian” is how the American Robin has been described, a characterization that could be applied to the one-time predominant population of Milwaukee- the Germans. It was the German-American immigrants of the early 20th century who built the houses in my neighborhood, those economical, practical duplexes on which the fledgling Robins are now perched in their neat, practically placed nest.  The nest appeared in a flurry of straw and hay earlier in the Spring, fitting perfectly on top of a brick column on the front porch, sheltered from view or the elements.

The mother became a regular fixture, first flapping away wildly whenever we approached, then warming to our presence (or just dedicated to warming her eggs), settling into the nest as we stood on the porch watching her. 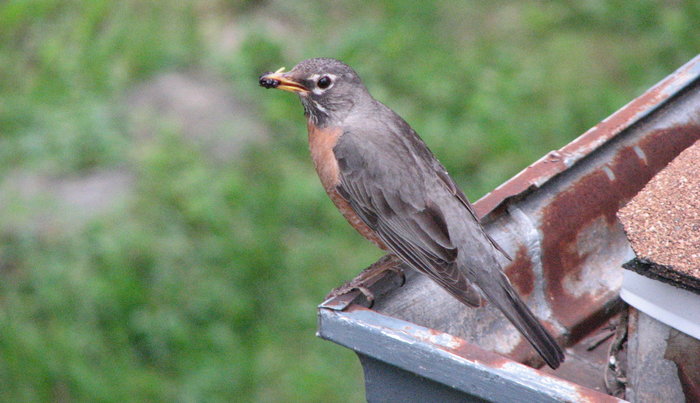 The Parent Waits Until the Coast Is Clear

I found I liked the consistency of her presence. She became like a neighbor you nod hello and tip your hat to on your way up the street. Or an animal totem, a ceramic figure whose head you tap on your way out for good luck and prosperity.

One day after the Robins had hatched and were barely peeping over the edges of the nest, I opened the door and a small hawk which had been sitting on the storm drain above the porch flushed out, landing on the top of a blue Subaru looking composed. Looking patient. We guessed it was a juvenile Sharp-Shined Hawk and I worried after the Robins even though I was informed that it would be difficult for the hawk to wedge its way into the nest nook.

I suddenly understood why the nature documentaries I was watching were always so pro-prey. Everyone is always rooting for the underdog. It was almost obligatory to show an alligator/black bear/T-Rex attempt and fail to catch a tiny furred (or scaled, as the documentary may be) creature until itself becomes the underdog, growing weaker and desperate. Only then will the documentary shows it really tearing into something. Everyone’s got to eat. But luckily (for the brood) the hawk moved on. 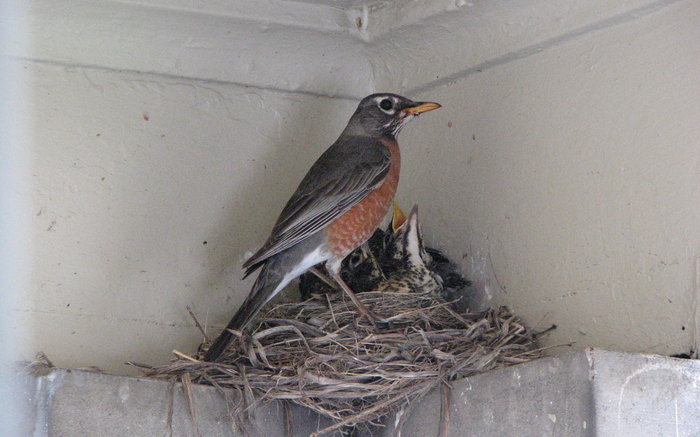 The hatchlings are lucky just to be here. Only 40% of nests produce live young and it just gets tougher from there. Likely, only 1 of the 4 in the nest will make it through the Fall.

They grow exponentially every day, every moment. The biggest one is getting bolder by the hour. I watch as it steps its way out, perching on the ledge. It looks like a dinosaur with its creaking legs, almost translucent beak and large black eyes. It waits; it appears impatient.

Tomorrow, the next day, certainly by the end of the week- it, and the rest of them, will be gone. 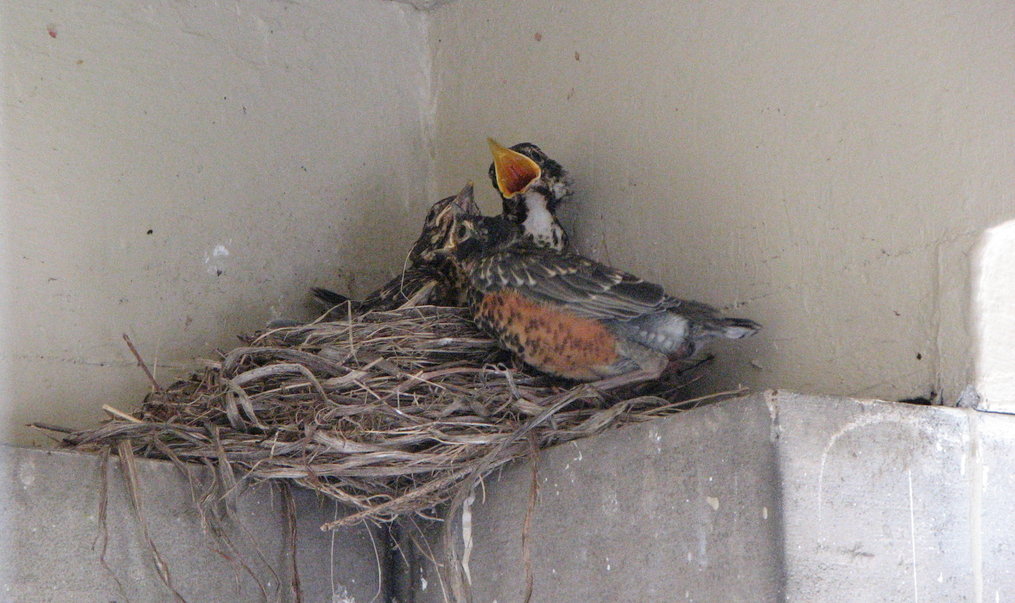 *”Squeak” &” chatter” is not exactly accurate. Listen to Robin sounds at the Cornell Lab of Orinthology.