For years, Doctor’s Park for me meant the beach, and only the beach. I would park and walk down the steep north ravine path which turned even blindingly bright, hot days cool and dark on the descent down to the water. I would hear the Lake before I could see it; the calming shush shush of waves just beyond the last line of trees.

The path would turn, open wide to sand and water and sky and bluff. On gray empty days, I would look around and felt like I owned everything. 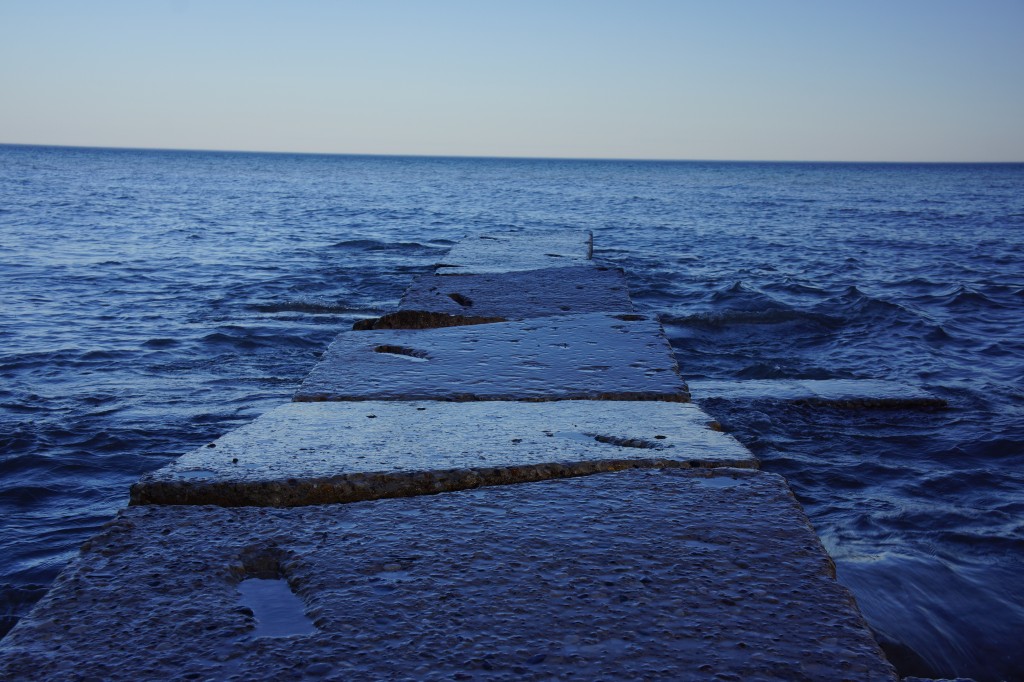 Jetty on the beach

I would go on summer days to swim in the always cold water, feet slipping over rocks as I went further, just a little further. In the fall and spring, I would walk the shore, eyes on the sand for odd rocks, green glass, lost hunks of coal, varnished driftwood, the occasional deer vertebrae or seagull skeleton. 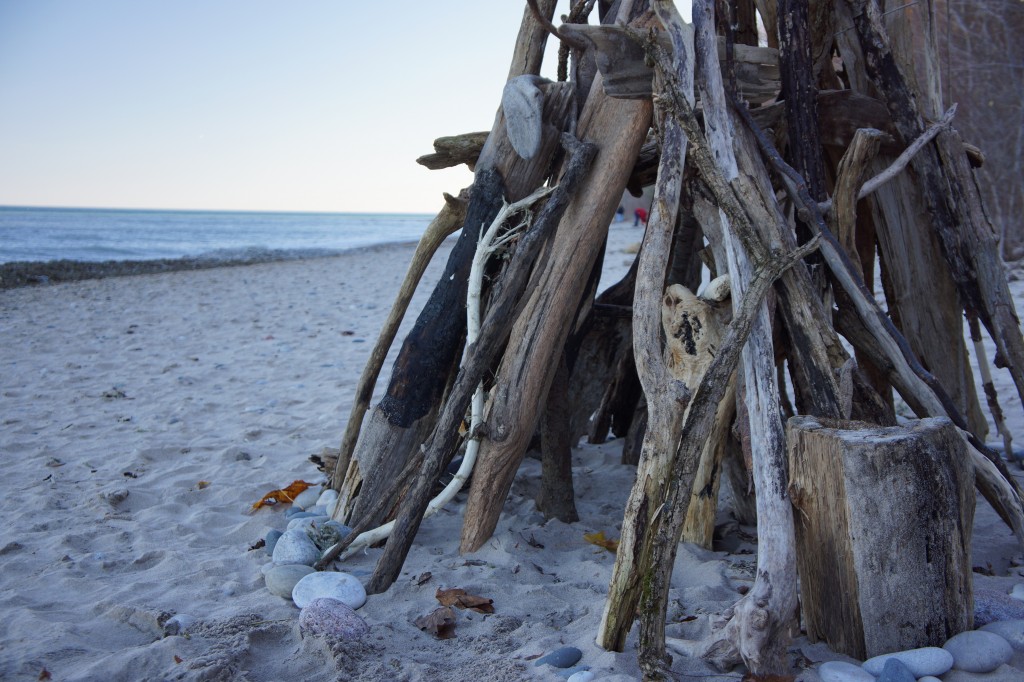 In the winter, water and snow and sand would be tossed together and freeze to form jetties of other planetary landscape. I would clamber over them, lost in the shapes until I realized I was far from the shore and on fragile ground. 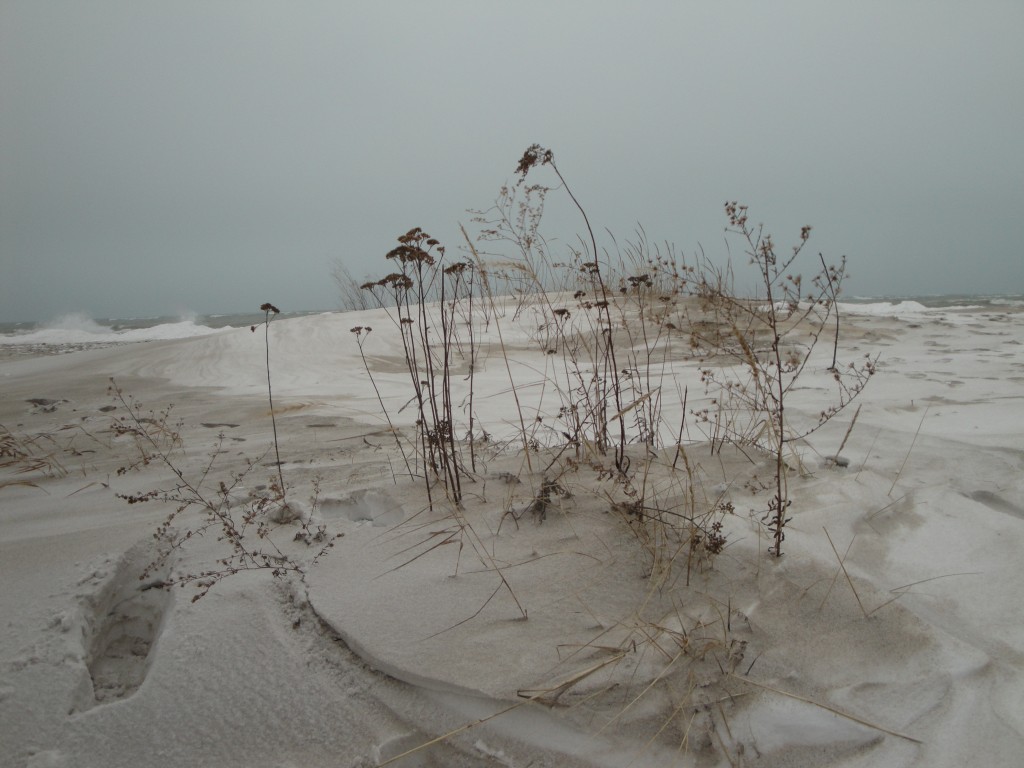 The beach part of the park seemed shimmering, changing, shifting with each season. In contrast, the upper part of the park, the bluffs and fields overlooking the water, felt static and dull: picnic tables, playgrounds, frisbee players, broad, well-mown empty fields. I rarely ventured up there in the dozens of times I visited the park.

But recently in researching the park, I found that in the past 150 years this area has housed summer homes and cemeteries and apple orchards and Depression-era camps. Structures were built up and layered next to each other before finally being sanded back down into park land.

If you were at Doctor’s Park in the 1852, you might have see the children of “Foxes Point” going to school in a small log cabin on the property. They would have been Dutch, part of the small wave of immigrants who settled in the area starting in 1948, escaping religious persecution and famine.

At that time, the Doctor’s Park land was owned by John Vrunwink, one of the founding members of the new community. He generously donated a section of his land so that a school and church could be built for the growing settlement. He also donated a small parcel in the southern corner of his property for a cemetery – needed for the numbers of settlers swept away in smallpox and cholera epidemics. 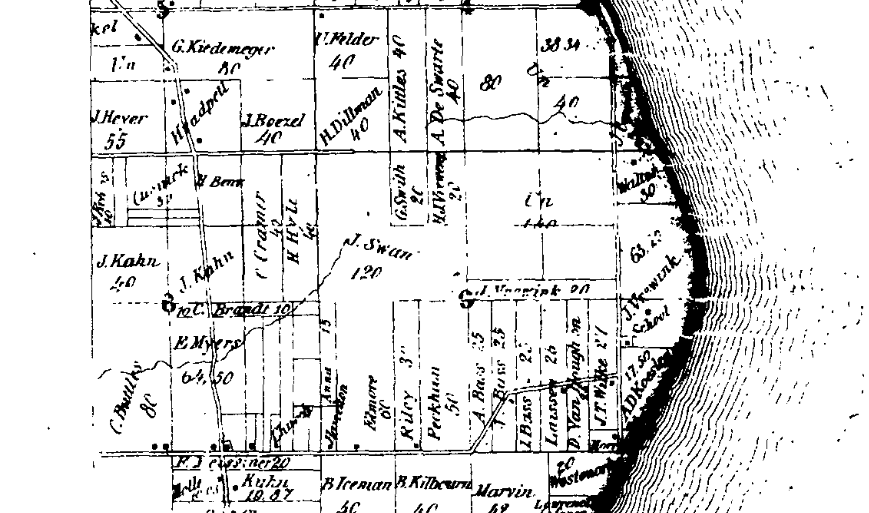 1858 map of Fox Point. The section labeled "J. Vrunwink & School" is now Doctor's Park. “Foxes Point,” was so named for the jutting bluff on the property that some surveyors thought looked like the head or nose of a fox. (Like constellations, this seems like something you have to squint very hard at to see.) © Fox Point, a planned village : it's heritage and development, 1843-1976 (which specifies map is courtesy State Historical Society of Wisc.)

If you were at Doctor’s Park in the fall of 1925, Abram Tellier would be picking apples. Tellier was the caretaker on what was then Dr. Joseph and Louise Schneider’s “Fox Point Farm,” their summer home escape from Schneider’s bustling Knapp St. medical practice.

Schneider’s apple orchard kept Tellier busy for a month straight each year;  the apples would be distributed to hospitals and poor families in Milwaukee. This generosity was characteristic of Dr. Schneider, a world-renowned eye surgeon with an egalitarian approach to treating rich and poor, and who had funded a hospital for women and children in Germany.

Schneider was a nature lover, and in addition to the apple orchard, the property included a nursery and rose garden, along with barns and a windmill. 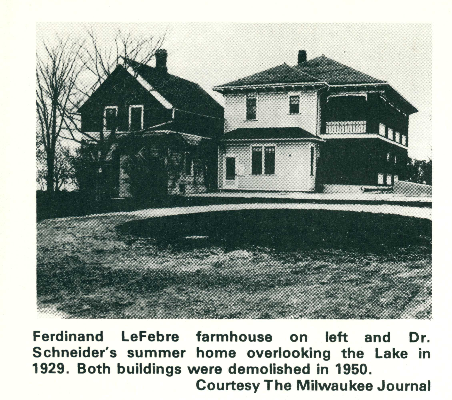 The Schneider house would not have been the only home on the land in 1925. At this point, the John Vrunwink log cabin would have also still been on the property. As seen in the picture, the Schneider home was built right next to the farmhouse of a previous owner. The Schneider house featured a large porch that overlooked the lake. © Fox Point, a planned village : it's heritage and development, 1843-1976

If you were on the bluffs in 1929, park employees would be weeding and sprinkling kerosene on the ground in an effort to grub out a persistent growth of poison ivy. Their work was part of $13,900 in improvements done that year; and after an additional $36,200 the following year, “Doctor’s Park,” the newest City of Milwaukee Park, was ready to be opened to the public.

Upon Dr. Joseph Schneider’s death in 1927, he willed his 60-some acres to the city for “recreational purposes by my fellow citizens: that such natural beauty as it possesses be maintained and that it be devoted also as a refuge for wild birds.”

What followed was a period of debate by the Park Board of Commissioners and the public over whether the park would be more “recreation” or “refuge” and 2+ years of park improvements which at least one incensed letter writer saw as the park board dragging it’s feet:

“the [Park] board has just found out that a little poison ivy has escaped notice…Of course the public must stay out until the ivy is removed. Perhaps in two years from now poison toadstools will be found and the public can wait some more.” 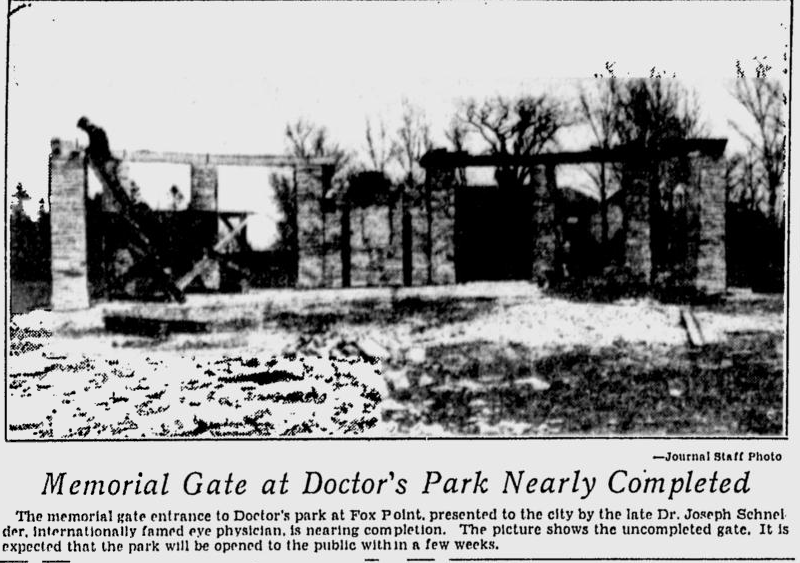 The $50,000 spent between 1929-30 included expected updates needed to turn private property into a public park – pumping system for drinking water, picnic areas, parking lot and retaining walls. However, the 1930 park budget also included $2,900 for the creation of a limestone pillared memorial to Dr. Joseph Schneider designed by prominent architect A. C. Clas.

The memorial was unveiled at the park dedication on September 15, 1930. The memorial honored Schneider, “eminent physician, true humanitarian and ardent lover of nature,” and his gift to the city. 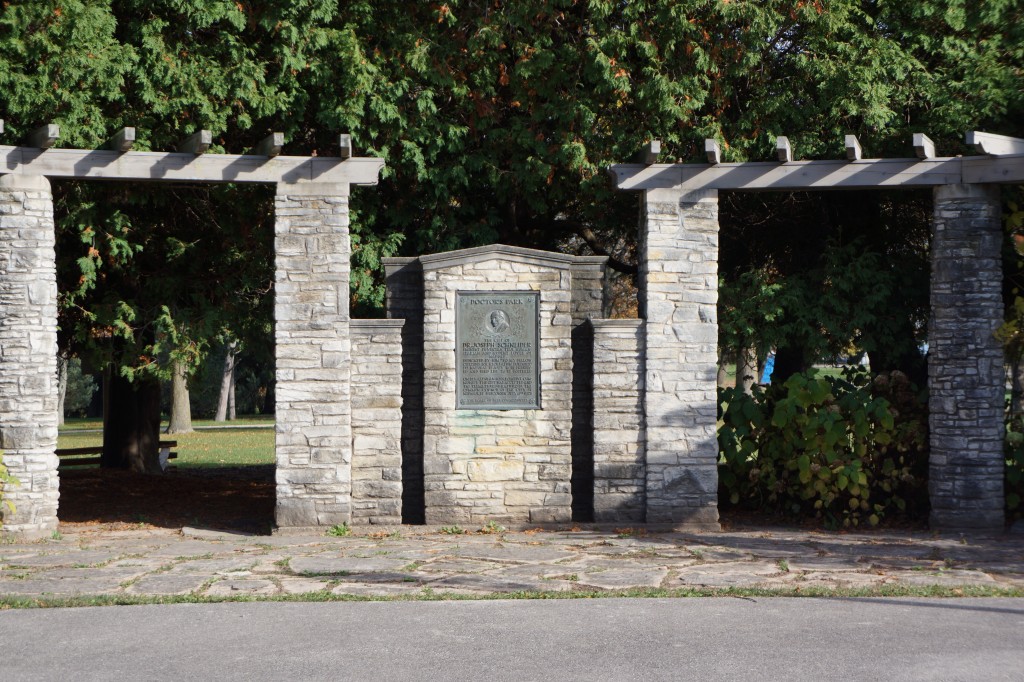 If you were at the park in the summer of 1939, 20 young women would be living in Dr. Schneider’s house, part of a Depression-era National Youth Administration program intended to provide training and employment to young people aged 18-24.

At “Camp Rising Sun,” as it was named, the women worked on sewing projects (in Dr. Schneider’s old converted barn) which would be distributed to families receiving county relief, county hospitals and orphanages.

The whole experience sounds fairly utopic, at least as described in a July 23, 1939 Milwaukee Journal article noting girls “happy and laughing over their ‘stay in the country’”:

“This is a work, study, play project,” says [NYA administrator] Miss [Irma] Hochstein. The work is done in the morning and consists of sewing and general housekeeping. Under the heading of study come instructions in nature study, home economics, etiquette, voice control and how to apply for a job. Swimming, archery, games, dancing, hobbies, hikes and beach parties fill the play periods….From 4 to 5:30 p.m. is play time, when most of the girls get into swimming suits and romp down to the long log stairway to the beach. 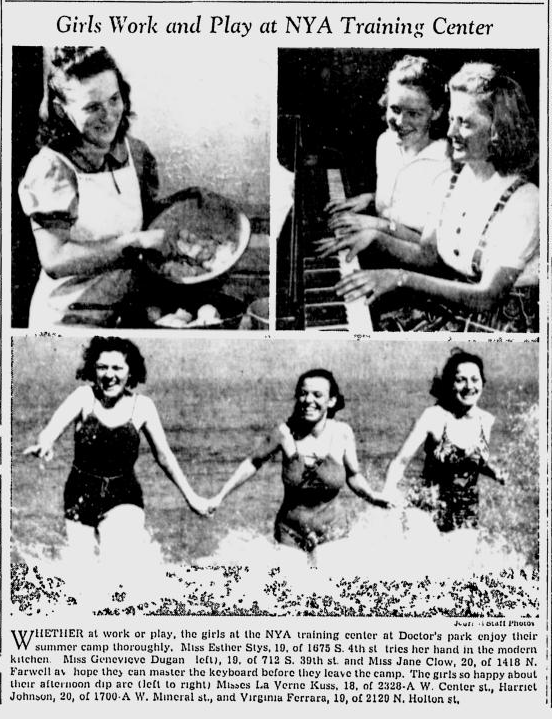 The NYA program in the park was not the only indication of the Depression gripping Milwaukee and the country. The new Doctor’s Park bathhouse was built in 1935 courtesy of WPA workers, who were engaged in projects all across the city from 1935-1941.

The Depression also forced the transfer of ownership of all Milwaukee parks from city to county hands, their budget having been squeezed for years. As of Jan 1, 1937, Doctor’s Park was now under the oversight of the The Milwaukee County Park Commission.

One person who had stayed with the park through these transitions was old Schneider caretaker Abram Tellier. At the time of Dr. Schneider’s death, Tellier had been caretaker for 7 years, living in the caretaker’s house with wife Louise and their children. It was arranged to keep him on as a maintenance man for the new park- first as a City of Milwaukee employee, then after the transfer of assets, as a County employee.

If you were here in 1951, Dr. Schneider’s house would be gone, along with his milk sheds and windmill and apple orchards and rose garden. The log cabin of early Dutch settler John Vrunwink would be gone as well.

As early as 1942, plans were being proposed to redesign the park and remove the old structures. At that time, Alfred L. Boerner, county landscape architect, submitted plans to update the park layout to better facilitate “cozy family picnics, small group hikes, swimming and beach parties.”

By 1951, caretaker Abram Tellier would be gone as well. Upon his retirement at age 70 in 1946, he was told that he and his wife Louise must vacate the caretaker’s house they had lived in for 26 years. Citing the housing shortage in Milwaukee at the time, Tellier petitioned to stay in the house, but was told that it would set a bad precedent.

Tellier and his wife eventually moved to Locust St., where he passed away in 1961 at age 85.

Today there are lovely vistas and benches lining the bluffs and picnic tables that always seem to be crowded with family reunions and a playground of clambering children. It’s still the beautiful spot that has made people want to visit here and live here and play here for hundreds of years. 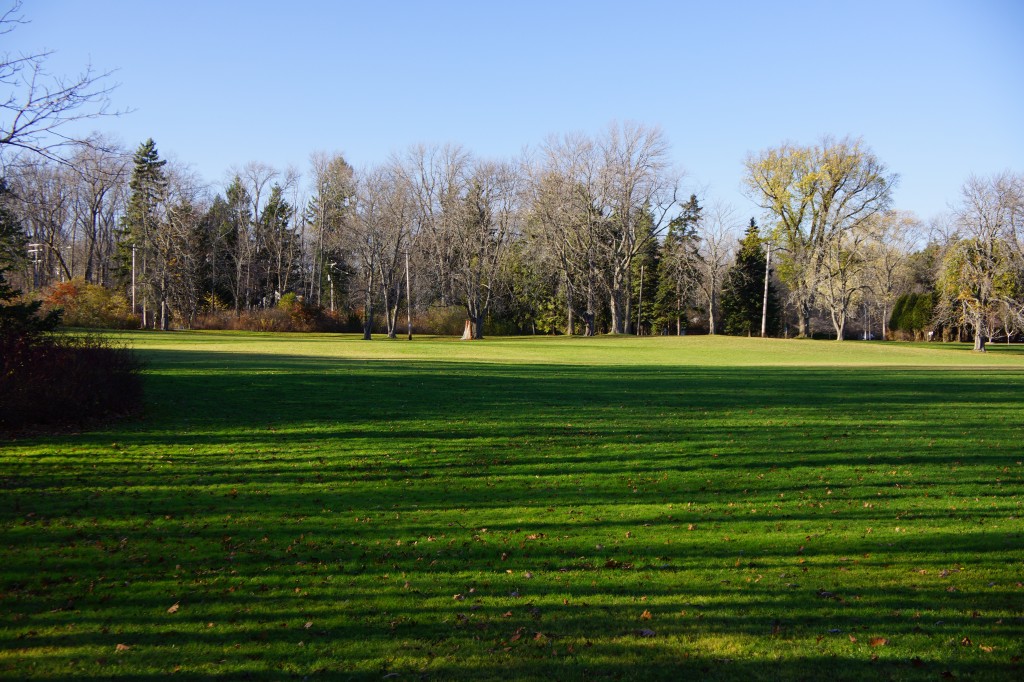 Not everything from Doctor’s Park’s historical past has been removed. If you walk south from the parking lot, across a field, through a makeshift path, there will be a fenced in area. It’s the remnants of the small cemetery that John Vrunwink donated to his Dutch settler community in the mid 1800s. 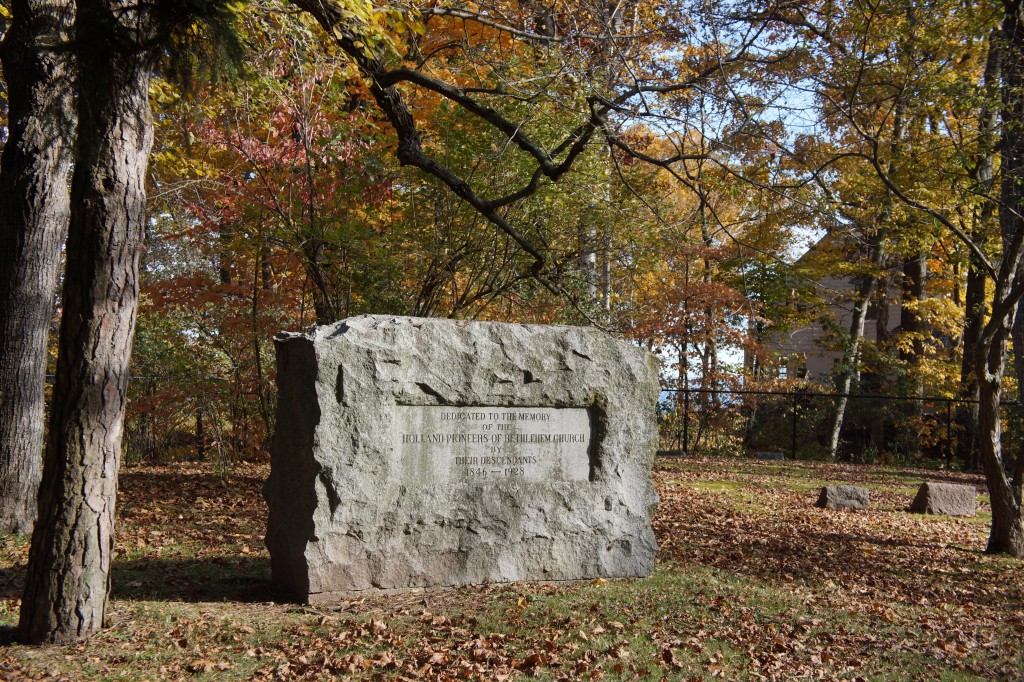 Fox Point Burial Grounds/ Reformed Church of Bethlehem Cemtery. About 15 grave markers are visible, but it is estimated about 80-100 individuals are buried there.