Go to the County Grounds if you are feeling post-apocalyptic. Go if you want to see Nature dismantling pieces of human civilization, slowly, relentlessly, beautifully.

The first time I went, it was gaspingly hot and dusty and I was alone on the Grounds. I had biked around for an hour before finding the area, after receiving wispy directions to the place from a co-worker. I finally found a  Milwaukee Parks sign and driveway, just west of the medical centers, and in the shadow of the We Energy Milwaukee County coal power plant.

The County Grounds is part of a natural area that expands over 1000 acres, and is partially developed in places, being home to businesses including Milwaukee County Research Park and the aforementioned power plant. The area behind the cream city brick Milwaukee County Parks building where I go is undeveloped, at least for now. There are no trails, just rolling grass and prairieland, clusters of trees, and worn footpaths of baked and cracking earth.

The grounds are layered in history, of structures built and then destroyed or decayed.
There is a cement stairway, leading to nothing, sprouting four-foot tall prairie grass between its cracks.  Footpaths that dead-end out into broad square patches of gravel or crumbling cement, the last remnant of a parking lot or building.

There is a railroad track that ends and begins abruptly, as if it were feeling vague about the whole idea. It becomes an impromptu trail, its ties gone under layers of grass and its rails forming trail edges that barely detract the encroaching trees and bushes. 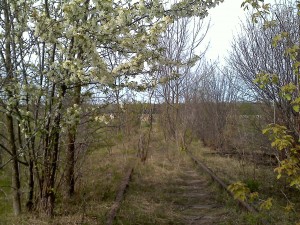 Looming (looming, really) in the northwest corner of the grounds you will see the former Milwaukee County School of Agriculture and Domestic Economy. Abandoned, windows broken or boarded up in a lovely red-painted particle board, matching its lovely red brick. The Dairy building and the Administration building sit, awaiting their next role as they slowly crumble. 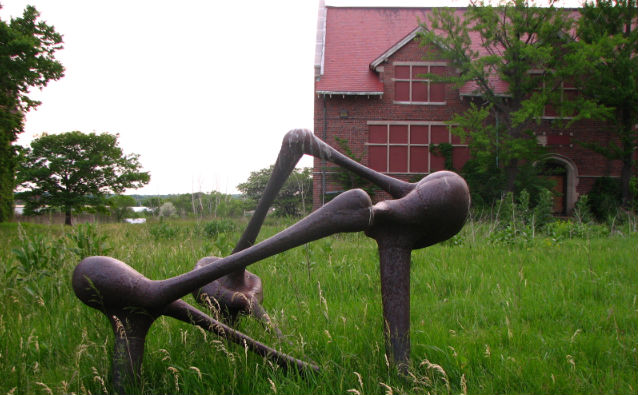 On my first visit, up on one of the ridges, the sun gave an impression of being bright and blinding and bleaching, as it did every subsequent time I’ve been there, although I’ve surely been there on cloudy days.

Sounds melt away as well. Trains pass in the distance. Cars drive on the nearby highway, but these things seem like no more than paper cutouts or slideshows, inconsequential, ready to be dominated. They have fallen silent, there is only a hot buzz in the ear and metallic trill of red wing blackbirds.

The County Grounds – open acres between a power plant and a highway –  should not seem so powerful to me. It’s just that the mood, the very air seems imprinted by the park’s proximity to places where people found themselves when their lives were not turning out as hoped.

The pretty pale County Parks building at the entrance was once an orphanage named Milwaukee Home for Dependent Children. The Muirdale Sanatorium, a tuberculosis treatment center, was located in the nearby Technology Innovation Center. The Ronald McDonald House down the road shares a plot of land with what was once the Milwaukee Insane Asylum, and in fact, the County Grounds is home to a small cemetery for the folks who lived there between 1880-1914. If you wander around, you will find a square section of trees and bramble, marked as the final resting place of “over 200 souls” in hope that “they, at rest, find the peace and sanity they desired in life.” Even today, the County Grounds are across from the Mental Health Complex and the Children’s Hospital.

These stopping places, the TB clinic, the mental health facilities, the children’s hospital, the orphanages, these places are at best temporary gaps in a life, places to repair and get back your life and at worst, for those who cannot heal, an unhoped for ending point. These places are put out on the fringes for a reason.

Nature is completely stoic in the face of these human tragedies. I find relief in this. Unaware, it keeps growing, working its way into the cracks between the brick and the metal and the concrete. Despite the location, the County Grounds remain an incredibly peaceful place, brimming with life.

Last summer, the prairie grasses and flowers were up to my elbows and there were birds everywhere- dozens of species, in the grass, in small bushes, thin trees and I quietly stalked them until a twig would crack under my step and the bird would alight elsewhere. One afternoon, I spent an hour creeping towards a pair of bobolinks, which I had never seen before. 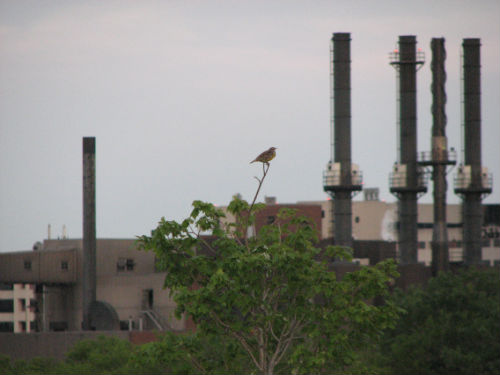 Even on a short stop there this week, I saw a Northern Flicker on a thin tree which had grown into the barbed wire fence separating the bramble of the County Grounds with the manicured lawn behind the powerplant.

The tree and vines around it were slowly encroaching on the fence. I looked around at the rest of the County Grounds, the structures being grown over and toppled and think to myself: the power plant better be on notice. The grasses, the birds, the beetles, the slow moving vines…they’re patient.