Two Canadian Geese come in for a landing on the small pond in Holler Park, sending up spray as they skim the surface. In a feat of double-vision, a airplane just to the east makes a similar arc into General Mitchell Airport.

Settled in on the lagoon, the geese bob under and resurface, shaking water off their feathers again and again. It’s March and the snow has melted and I can relate to the cleansing ritual. 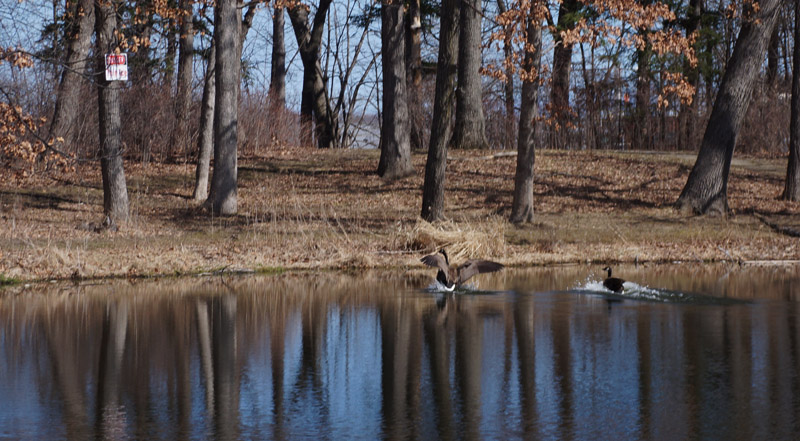 Holler Park’s trees are bare, but the place vibrates with activity. A Northern Flicker and Hairy Woodpecker chip away at tree trunks and two nuthatches putt putt down an oak tree headfirst. Near the pond, a Cooper’s hawk stares down, very still and severe. Black capped chickadees make their see-saw call, a sound that always reminds me of summer and childhood, for reasons I can’t remember. 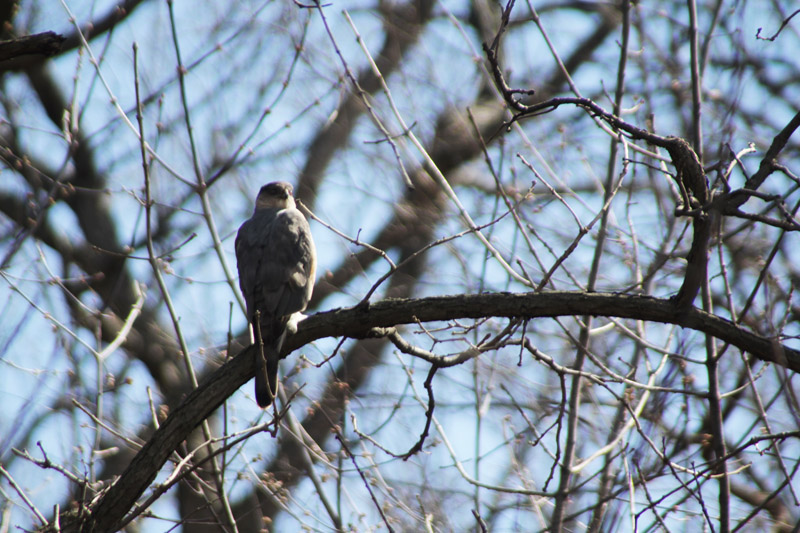 The park was named for Miss Mary Holler, a well-to-do woman who gifted the land in 1931. Newspaper articles portrayed Mary Holler as a hard woman, a spiteful woman. I might venture to describe her as a lady who was unlikely to change her mind once she had fixed her opinion on someone or something.

Mary lived with her older brother John Holler well into both of their middle-ages, at which point John fell for a Ms. Lillian Ziemer. Mary took an immediate dislike to Lillian, especially after John moved into Lillian’s home on South Kinnickinnic Avenue. The disdain turned to fury after John’s death in 1928 and the revelation that he had made an 11th hour change to his will which bequeathed $70,000 (almost $1 million today) to Lillian. By all accounts, Lillian had cared deeply for John, nursing him through his final illness.

Mary sued Lillian, charging alternately that she had forged the will and that her “undue influence” had manipulated John into changing his will. In her spare time, Mary visited Forest Home Cemetery to remove the flowers Lillian placed on John’s grave each week.

Lillian Ziemer was from a well-off family and neither wanted John’s inheritance or a public court case. Lillian revoked her right to the inheritance in hopes that would be the end of it. It was not. Mary decided John’s will was a matter of “family honor” and forged ahead with the suit. 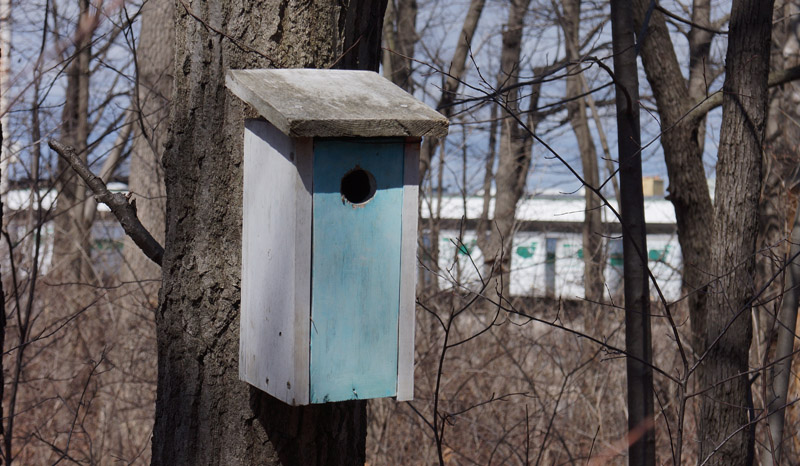 After a messy court battle which was occasionally front page news, the verdict was delivered – the will was upheld and Lillian awarded the $70,000. Mary fell into a depression and took an extended vacation to Miami. In December 1930, the glass-bottom pleasure boat she was sailing in caught fire and sank. Mary’s body was never recovered.

Mary Holler’s own will included a page-long rant against Lillian Ziemer, the trial witnesses, the trial lawyers – all of whom Mary felt were conspiring against her. Vitriol aside, Mary Holler was quite benevolent; the bulk of her estate went to charitable organizations.

One recipient of Mary Holler’s largesse was the Town of Lake*, to whom she donated 10 acres for the purpose of creating a public park.

However, the timing of this gift was tricky, as the city, county and country were becoming ever more squeezed by the Great Depression. By 1934, Town of Lake residents began protesting spending money to develop Holler Park when their sidewalks, streets and sewers needed improvements. So when Milwaukee County urged municipalities to turn over their parks to county control as part of its 1935 park management consolidation project, Town of Lake jumped at the chance.

In December 1936, Holler Park officially became a Milwaukee County Park. (A move that at least one newspaper writer considered a shrewd deal for the Town of Lake…and one that made suckers out of Milwaukeeans.)

At the time of the park transfer, various Works Progress Administration crews were hard at work throughout Milwaukee County. One such group was the National Youth Administration (NYA), a federal program to employ and educate young adults aged 16-25. In 1938, the NYA sent 55 young men to maintain and develop Holler Park. During their spring tenure at the park, the NYA kids built bridges, erected a shower house and installed a kitchen in the lodge.

These improvements readied Holler Park for it’s next group of visitors. The summer of 1938 saw the launch of a brand-new day camp at Holler Park for children with physical disabilities. The camp, recognized as one of the first of it’s kind in the country, was a partnership between the Easter Seals and the Milwaukee County Unit of the Wisconsin Association of the Disabled, and was initially staffed by NYA participants.

“Many of the children attending the Holler Park recreational day school have never been away from parents before or among other children.” (Milwaukee Journal, July 15, 1943)

Amazingly, the partnership between Holler Park, Milwaukee County and the Easter Seals continued for nearly 70 years. The Easter Seals ran day camp sessions at Holler Park from 1938 through 2015. As of 2016, it appears that the camps are now held at the larger Grant and Underwood parks. 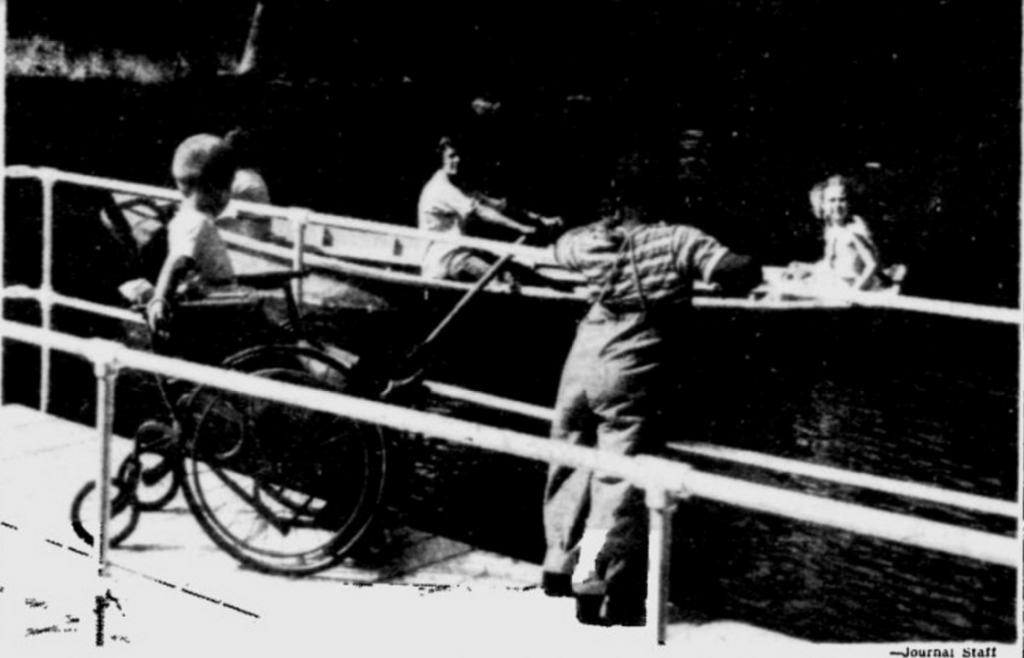 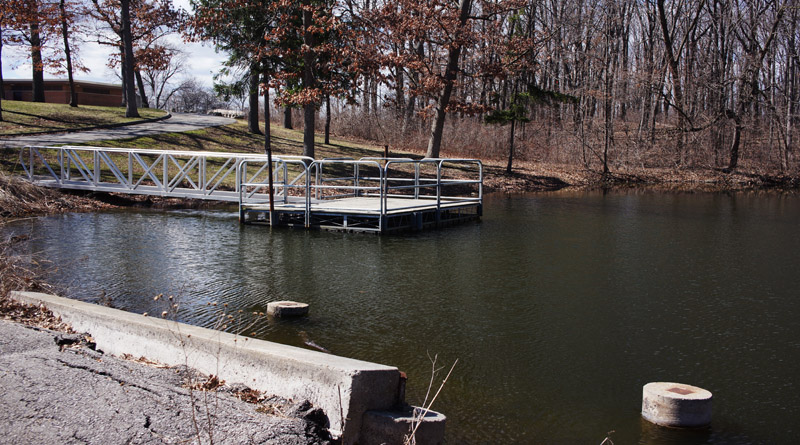 March 2016. Pieces of the old fishing dock visible in foreground.

The camp was custom built for the children – it had wheelchair accessible fishing spots and a therapeutic wading pool. Campers would also fish, go for boat rides on the lagoon, hike on the short trails, make crafts and build kites.

A 1940s description of the camp recounts how the children set up pretend “grocery stores” with recycled empty boxes and cannisters. Being in the midst of WWII, the children’s pretend play included exchanging ration point coupons for food.

One of the most attractive parts of Holler Park is the lodge, an Adirondack-style structure with wide verandas outside and a stone fireplace and dance floor inside.

The young park campers were also drawn to the lodge:

This veranda makes ideal highways for coasters, tricycles and kiddie cars. ‘Traffic cops’ – little boys on crutches or in braces – stand at the ‘intersections’ and enforce stop and go signals and speed laws. ‘Offenders ‘ are given ‘tickets,’ haled before a ‘judge’ and ‘fined varying amounts of play money.’ (The Milwaukee Journal, July 15, 1943) 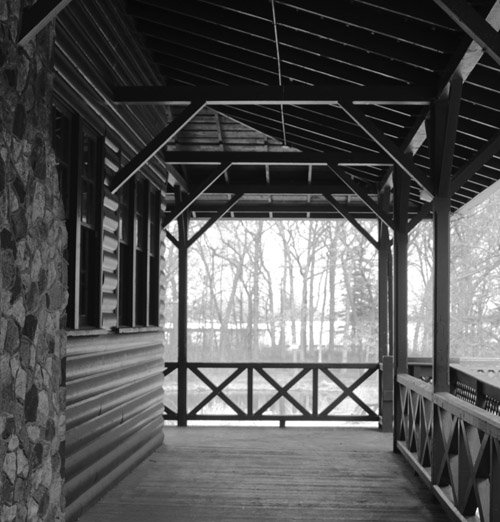 The park is perhaps not at it’s most charming in March. The bare tree line does not obscure the adjacent view of light industrial buildings and green and white tractor trailers. Across the street, one company is building or expelling something that is attracting an alarmingly large amount of seagulls, swarming tornadically to the east.

But it’s easy to imagine what the park will be like in the summer, when the trees fatten with leaves and form a small enclave hidden from the surrounding industry. It will create this tiny oasis that was so loved by thousands of campers who were able to spend a week away from their routine and get out and “marvel at the wooded beauty.”

*Town of Lake existed until 1954, in an area that is now distributed to parts of St. Francis, Cudahy and south Milwaukee.