Anyone who has driven along the stretch of Hwy 94 in Milwaukee between Miller Park and Downtown has seen the Mitchell Park Conservatory, or what we all know them as: the Domes. Those three monolithic geodesic structures hover on the skyline beyond the 27th Street viaduct like a post-war vision of a dystopian future where remaining nature is safely encased in glass.

Which is not without a certain amount of irony. The domes are perched over the fertile Menomonee River Valley. At least it was fertile, when the actual Menominee lived there. Originally a wild rice marsh, and a center of travel and agriculture for many American Indian groups, the Menomonee Valley became a hub for rail yards, factories and tanneries as Europeans moved in in the late 1800s. To say this had a deleterious effect would be an understatement.

Fortunately, things have been looking up the last few decades for the Menomonee Valley, pollution and nature-wise.

And sci-fi dystopia aside (or included), I do love the Domes. Constructed between 1959 and 1967, with a botanical-garden-by-way-of-bomb-shelter aesthetic, stark curved and angled lines of cement and glass and metal, the domes exude a “future as envisioned by the past” feel.

I’ve visited the Domes a handful of times, winding my way through the Desert Dome, the Tropical Dome and the Floral Show dome, with its rotating and often mystifying exhibits. 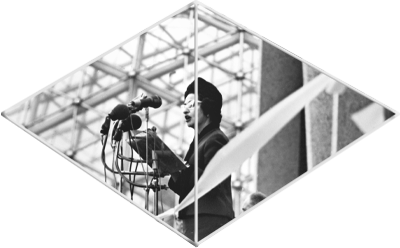 The Domes are a particularly, eerily great place at night. At night, inside the breeze-less, temperature controlled Desert Dome, without view of blue sky or adjacent buildings to anchor yourself in place and time, the scene turns into an otherworldly moonscape.  You’re surrounded by things that feel ancient and impossible, trees that can live for a thousand years or plants that can go for months without sustenance.

November through March, the Domes are open late on Thursdays for their “Music Under Glass” series. When I went last year on a subzero February night, begging for warmth, for green, for birds, most visitors were under- 40 couples who looked like they are on first dates, or second dates, still looking shiny for each other and trying to sit sexily wooden benches, drinking white wine. I bustled in between them obliviously, trying to get to the informational placards, all “Dang, did you know that bamboo grows two feet in a day?”

Photos in the Domes show that the park once had sprawling gardens, stone carvings and fountains. The broad Sunken Gardens were removed in 1994 and matching staircases that dead end into a low grassy area are what remain. I look at the old pictures and marvel… 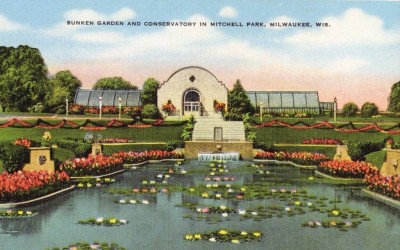 Postcard of the Sunken Garden with original Conservatory (1898-1955) in background.

So, no, there are no elaborate gardens at Mitchell Park anymore. And the Park pavilion and utility buildings could use a facelift. And trash detracts from the beautiful, curving lagoon with its marsh grass and weeping willows. (On my last visit, I stepped all over a broken 40 of Olde English on the pathway while concentrating intently on a yellow-rumped warbler; another visit my friends and I saw a squirrel carry a half-full smoothie up a tree with its teeth, an amazing feat we still talk about, but nonetheless an example of how much junk is lying around.)

Despite these details, I love Mitchell Park because it truly feels like a community park. As mentioned, it sits on the southern end of the 27th street viaduct, one of the many physical barriers separating neighborhoods in Milwaukee, and more often than not, lines that aid the racial segregation of the city. In this case, the bridge separates predominately African-American north side neighborhoods from  predominately Hispanic south side neighborhoods. 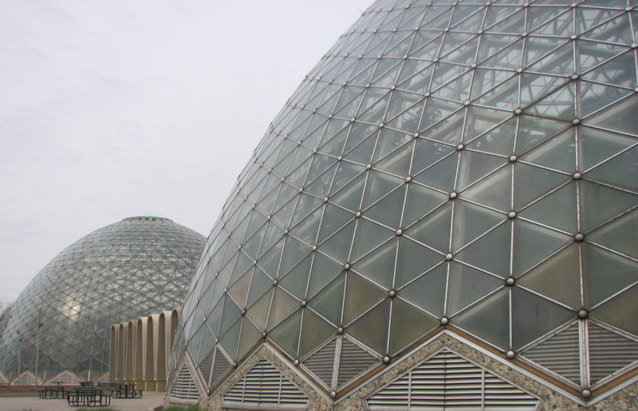 Two of the Domes

Perhaps due to its position, practically on the bridge between North and South, or maybe just due to its iconic status, Mitchell Park visitors have seemed more diverse (racially and otherwise) than many other parks I’ve visited in Milwaukee. It feels like a locus, a busy park, a park that is doing all the things that great public spaces are supposed to do. Even on a morose cool Sunday which threatened rain, I watched a large group gather for a family portrait, two women in athletic gear walking backwards, presumably for aerobic effect, teens on the basketball course, children and parents on the playground, googly-eyed lovers strolling the path, and two men drinking Milwaukee’s Best who invited me to join them in fishing along with the dozen or so others who gathered with their reels cast into the lagoon.

If you’ve visited the Domes but haven’t stepped out into the park, you are missing out. Bring your fishing pole, bring your binoculars. Or my favorite, on a sunny day stop at Pete’s Fruit market and get some plums or some mangoes and some tacos from the truck on the corner. Haul your food up a slope overlooking the lagoon. Eat your tacos; watch the people; be a part of the community. It will be messy, but it will be bliss.